Holy Saturday. The Shunamite Woman. All is well. 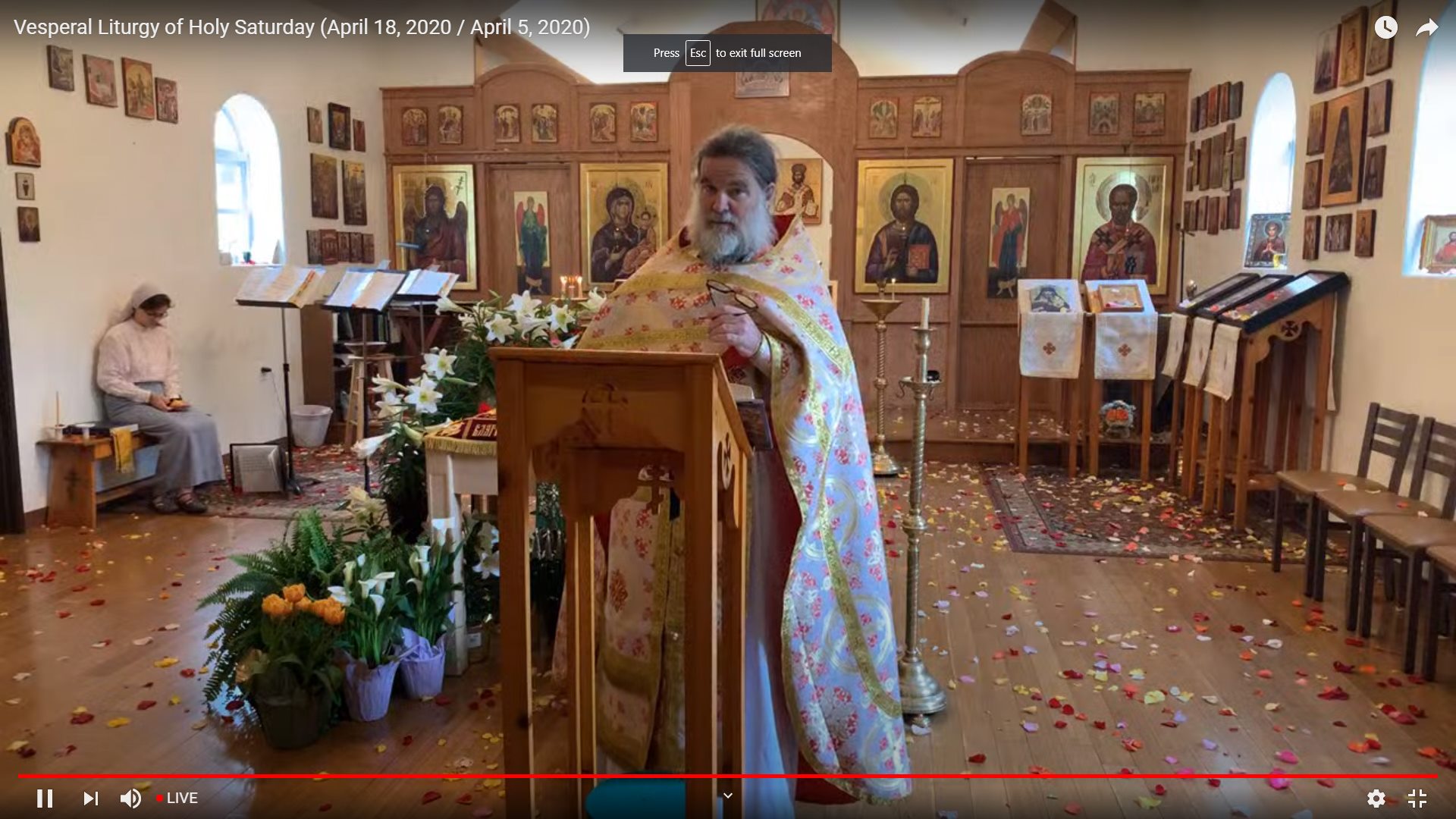 Synopsis: Homily before the tomb after reading of the Gospel which proclaimed the resurrection on Holy Saturday. All is well. These were the words of the Shunamite woman AFTER she had lost her son. We all have problems, sadness, regret, but if we are Christians who live according to the resurrection, all is well. 2020-04-18

In the name the Father, and of the Son, and of the Holy Spirit, Amen. I sing “Christ is risen" and the whole sequence that opens the service tonight and that we do during Bright week; I sing that to my grandsons all the time. Recently Monster was being put to bed, and they have the sequence they go through with him. And then he said “sing Popa song”. “Papa song” is “Christ is risen” and “Let God Arise” and everything. I sing in this peculiar Appalachian dialect. It's sort of a mixture of what it really is and what I've made it to be. My grandsons love it and the reason I am telling you this is because the resurrection is always with us, even when there are difficulties in our life.

If you'll indulge me for a minute, I wanted to talk about one of the parables. It always hits me very hard, and even harder, to be honest with you, as every year that goes by.  There are many difficulties as a priest, and I encountered, not quite 3 years ago now, a great difficulty when my son died suddenly. There is sadness in all of our lives. Some of us have greater or lesser troubles; some of us cope with them better than most, or not so good. We all have these difficulties in our lives, but in the end, “all is well”, because the Lord is risen and because He abides in us and we are getting perfected.

Of course, the steps that we're taking to perfection -every single one of them - is an imperfect step. And sometimes it's a very difficult step and a very hard time. This is a hard time of life for a lot of people, both Orthodox and not, believers and unbelievers; some people are really struggling with what's happening in the world today. There are worries about what's happening now, what will happen later: “what about my job, what about my business, what about my older grandmother, will she get sick,  I'm missing the Mysteries”. There's so much that's happening, so much difficulty.

And to me all of these things are encapsulated in this reading from the Fourth book of Kings about the Shunamite woman.  She had a son, who was promised to her by Elisha. She didn't believe him. She was old, and she didn't believe that she would have a son. So, she said: “don’t play tricks with me.” But it came to be true; in the season that was promised, she bore a son. The son lived, I think, about 10 years, and he and his father were working in the field, and he got a headache. He probably had a cerebral hemorrhage, and he died in his mother's lap. His mother had said 10 years before “Don't fool with me, don't tell me something that you're not going to do. Don't do that”. But then the son was born and she loved the son more than air, and then he dies!

She reacts very peculiarly. She wants to go to the Elisha, and it's not the right time of the month. There is a certain time when he she would go see him, and it was not a new moon, it was not a Sabbath and her husband asks why she is going, but  she won't say anything, except that she says: “all is well’.

All was not well! It wasn’t well at all. She had a dead son in the upper room of our house. She was hurrying to see Elisha. And of course, he’s aware that something's wrong but he doesn't know what it is. Nobody in the world knows what's wrong, only God. Even those closest to you cannot really know what's wrong; they can't even figure themselves out, so they certainly can't figure you out. There are all these troubles in the world, and you have troubles and your loved ones have troubles - but all is well.

As Christians believe that. We don't pretend that everything that we go through in life is good and wonderful: we don't pretend that at all. We're not playing mind games with ourselves, but truly all is well. This woman had great faith that her boy was going to be resurrected. She didn't exactly completely comport herself like she believed that, but I tell you, she did. She was working through human grief and doubt, but she believed because that's why she had the servant saddle the ass, and she went to see Elisha.  He had Gehazi go ahead, with his staff, which symbolized the cross.  But he needed to be touched, this boy needed to be touched not just by Gehazi, and not just by the wood of the cross, but by Jesus Christ Himself. And that's who Elisha is in this instance, as a type.

He went to the boy to the boy and put his eyes on his eyes, and his nose on his nose, and his lips on his lips, and his hands on his hands. I envision that he's making a cross when he's doing that. After 7 times the boy comes alive. It was well now, but it had been well before because the mother had said “all is well”.

Is all well with you? I hope it is. I hope that you live as a Christian. And I hope that despite sadness and difficulties in life, that you always believe that all is well. Because it is - not from wishful thinking, but you are growing to become perfected, so all is well.

Whatever you go through to become perfected, you won't remember the pain, or at least not in a painful way. I talk to my people in prison about this all the time. Prison is a diabolical, terrible place. I am not saying that people shouldn't be put in prison, although I know some people that I don't think should be. In general, there's a need for prison because of the misbehavior of men, and how humans can act beastly, and they need to be shut off from society, either to repent and reform, or to be safely away and sequestered from society.

Prison is a hard place. It's a hard place because of the isolation and the time, and the reminders time and time again that in the prison, the prisoner is really not a worthwhile human being. They don't even call them by any name other than “offender”. There's a lot of pain for these men and women. I'm not saying they have not caused pain. I am not pretending that they have not done bad things,  but even for those who have repented, there is still pain: their dad died when they were in prison, and their sister and brother don't talk to them anymore, and they did a terrible crime but they're not able to make amends for it. There is a way to do that in the prison but if the people don't want to talk to a prisoner, he can't talk to them; that's probably a felony. They're living with this isolation and pain. Some of them are getting very much older, many of them are going to die in prison.

I tell them something that I completely believe, completely with every pore of my being. If I didn't believe it, then I wouldn't be a Christian. In the next life there will be no sickness or sorrow or sighing; there will only be life, there will not be sadness. If we remember what happened in the previous life, all the pain that we went through, whatever it is, we won't remember it with pain. How can that be? I don't understand. I really don't, but I know it's true.

This Shunamite woman who lost a son and felt all of the grief that a human being would normally feel because of the loss of a son, could still could say that “all was well”. Now one could argue if you want to that she was just trying to get people not to talk to her because she didn't want to talk to people in her grief. I know exactly how that is. When I was full of grief about +Daniel, I didn’t want anybody to bother me. I wanted to do the things that I wanted to do: I wanted to pray, I wanted to come to the services. I didn't want people to come up and express things to me. It was a very difficult thing for me to have people talk to me. I know how that is, but that's not why she did it. She did it because it was well because she believed, even though her emotions didn't believe. She didn't exactly greet Elisha in the most proper way. She basically upbraided him, but that was her emotions, and he knew it. But it was well with her because she knew that her son would live. This I believe this with all my heart.

This is a perfect story, to be read among the 15 that we read in this Vesperal Liturgy, because it's very realistic story. The resurrection is beautiful and holy and it leads to perfection. But we're not perfect now, and we're not beautiful now, and we are not holy now, but we're going to be. That's what makes me very happy. We are going to be holy. in the midst of all this we are going to be holy, so all is well. If we lived in this way, that all is well, even though we go through difficulties, then we will have joy in our heart. Nobody can take that joy from you, no matter what happens, whether you are free or not free (in a worldly sense). Nobody can take that joy from you, if all is well in your heart. That is what we are celebrating today. No matter what your troubles are, believe, and live as if you believe that all is well, because it is, because of the resurrection. God bless you and help you. Amen.