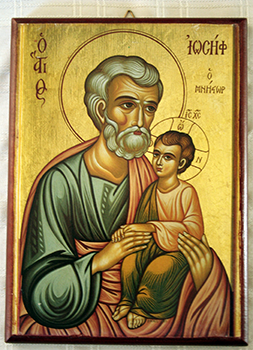 In the Sundays before the Nativity, we recalled all the forefathers, both of the flesh and of the spirit, who lead up to Christ. Today we celebrate the memory of three particular saints who are closely related to our Lord, David the King, Joseph the Betrothed, and James the Brother of the Lord.

The prophet and King David is the source of the royal line of the Hebrews from which both the Virgin Mary and the righteous Joseph were descended. Because of this lineage, Jesus Christ could properly be called, "King of the Jews" for in the flesh, He is of royal lineage. Of course, because He is also God, the maker and ruler of all creation and was therefore not only King of the Jews but King of all that is.

From each of these righteous men - David, Joseph and James - we learn much about the spiritual life. David, of course, was a man after God's own heart, as the scripture tells us and so from him, we can learn how to draw near to God. Even when he fell into grave sin, we see from David's deep and heartfelt repentance our own path back to God when we fall away.

James, the Brother of the Lord, was the first bishop of the Church in Jerusalem. He presided over the first apostolic council (which is described in the book of Acts) and was finally martyred for his confession of Jesus Christ.

Joseph, the betrothed of the Virgin Mary, was chosen by God to be the guardian of Jesus Christ and his holy Mother, a task which he performed with great humility and diligence.

Too often when we consider the saints we tend to project our own situation and passions on them and as a result they become a bit clouded. Few are more distorted in popular life than the righteous Joseph and so it is important to stop occasionally to see who he really was. 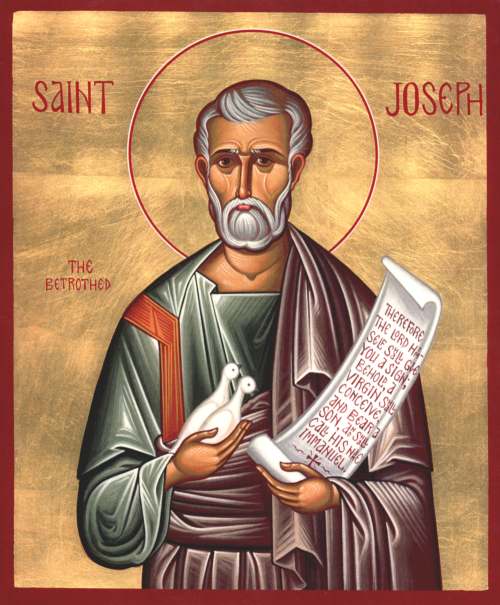 First we must remember that Joseph was not a young man, he was indeed already a widower of many years with at least six grown children (there may have been more as the number of daughters is uncertain). At the time he was chosen to be the guardian of the Virgin Mary he was already 80 years old and according to the great menaion of St Dimitri of Rostov he lived to be 110 (meaning that he died just before Jesus began His public ministry).

Although he was of royal lineage (being in the line of David the King) Joseph was a poor man who earned his living by means of hard labor (for he was a carpenter). Being a carpenter in that time did not mean going to the lumberyard and picking up a load of 2x4's, plywood and nails with which to build a house - rather it meant going out, felling a tree, sawing it and shaping it into what was needed and then, without nails, assembling that lumber into what was desired. It was extremely hard labor, and this was the daily life of Joseph.

He was miraculously chosen by God to be the guardian of the Virgin Mary when she was no longer able to live in the Temple. Although it was the custom for young women such as her to return home and wed and raise families, she was unable to return home as her parents, Joachim and Anna, had died and she was the only child. Also she had made a vow to remain a virgin dedicated to the service of God and the priests recognizing her piety and holiness did not wish to force her to break that vow.

Therefore all the eligible widowers were gathered at the temple and from each one was taken a staff which was then placed in the Holy of Holies. The staff of Joseph began to bud just as the staff of Aaron had in ancient times to indicate that he was the one chosen by God. Though he sought to avoid this honor, Joseph finally submitted to the will of God and took the Virgin Mary into his household and for her protection she was betrothed to Him (otherwise she would be considered a prostitute or a mistress, being found in the household of an unrelated man.) Thus we call Joseph, "the betrothed" to set him apart as the chosen protector of the Virgin Mary and her divine Child.

Joseph was also righteous, that is, he heard the word of the Lord and kept it. When the Virgin was found to be with child, he assumed this pregnancy to be the result of youthful passion and adultery. He set out to resolve the matter secretly so that she would not be accused or exposed to public dishonor. But before he could accomplish this, an angel came to him in a dream and revealed to him that this pregnancy was not the fruit of sin, but rather that it was the miraculous fruit of righteousness and that the Virgin had been chosen by God to bear the Messiah, miraculously conceived without an earthly father.

Joseph became, at this moment, the very first convert to the Christian faith for he abandoned his own fallen opinion and received with joy the revelation of God that this Child would be for the salvation of not only the people of Israel, but of all mankind. Even though this belief was tested by the evil one (as we see depicted in the icon of the Nativity) Joseph did not doubt but remained faithful to the word of God that had been given to him by the angel. Later, after the birth of the Child, an angel again came to him and instructed him to take the Child and his mother (note the words here - the angel did not say "your wife and son" or even "your betrothed" but "the Child and his mother" indicating the true relationship between them all) into Egypt to avoid the wrath of Herod. Here we see a man, over 80 years old, in obedience to the word of God embark upon a very difficult journey of months over the sands of the desert from Israel into Egypt. Even today this is a difficult journey by car or train and at that time the only transportation was to walk. But Joseph, putting his trust in God, obeyed.

From this journey to Egypt and the return we can see the complete dependence and faith in God's providence in the life of Joseph. Joseph had no real idea where he was going; he did not know anyone in Egypt; he had no resources or connections. Like the Hebrew people of old, he simply followed day by day the leading of God. Even after having arrived in Egypt and settled there, when they returned again Joseph was redirected throughout the journey avoiding Jerusalem and Judea going into Galilee and finally returning to his home in Nazareth.

Some 30 years later, Jesus Christ would reiterate this very attitude of simple daily dependence on God in the sermon on the mount. Because he heard the word of the Lord and kept it, because of his simple and unshakeable trust in God, and unwavering dependence upon providence of God, Joseph is known as one of the Righteous Ones.

In being the betrothed of the Virgin, Joseph is also known as the guardian and protector first of the Virgin Mary and then of her child the God/man Jesus Christ. This ministry as guardian of the Virgin and child is an angelic calling. From the intervention of the angels in the birth of Christ we can see that they themselves descended from heaven to serve God Who would become man and to wonder at the mystery of the incarnation. God, Who was above all things, submitted Himself not to the angelic life, but descended even to the physical world and become man. He was subject to all the dangers and corruption of the fallen physical world. He could be harmed, he could be injured and even killed. But the angels continued to serve and protect him and when they saw danger they warned those who were charged with the protection of the divine Child.

When the angels saw the intent of Herod to destroy the Christ Child through mass murder of the infants, the angel came to Joseph who was the earthly protector. The angel warned Joseph in a dream and committed the Child into his care. Joseph became the agent on earth of the angelic host who served God in heaven. In taking the Child and his mother to safety in Egypt, Joseph was doing the work of the holy angels and so shared the angelic calling. In Egypt, and later in returning to Israel, he continued to be the agent of the angelic host and even after his death, he performed the angelic task of proclaiming the good news for when he descended into Hades to await the coming salvation of the God/man Jesus Christ, he proclaimed the good news of the coming of the promised One to those among the righteous who awaited His coming that they might be freed from the captivity of the evil one.

Joseph was indeed one of the righteous and as the betrothed of the Virgin Mary, he became the agent of the angelic host in protecting and serving the incarnate God. His unfailing and undoubting trust in God stands for us as a shining example of how we can order our own lives. Just as he did we trust in God, we hear the word of the Lord and order our lives in obedience to it. Just as he served God in imitation of the angels, so also we serve our Lord Jesus Christ.

The righteous one, Joseph the betrothed, is the very first convert to the Christian faith and stands even now before the God/man Jesus Christ and His mother, the Virgin Mary as the first of us all who have left behind our own fallen and sinful lives in order to serve God and follow Jesus Christ as He leads us from earth to heaven.

To receive regular mailings of sermons, and scriptural and services commentary and other things throughout the church year, read our blog “Redeeming the Time” (https://www.orthodox.net//redeemingthetime). You may also subscribe to the RSS Feed or receive its postings by email.

All rights reserved. Please use this material in any edifying reason. We ask that you contact St. Nicholas if you wish to distribute it in any way. We grant permission to post this text, if completely intact only, including this paragraph and the URL of the text, to any electronic mailing list, church bulletin, web page or blog.