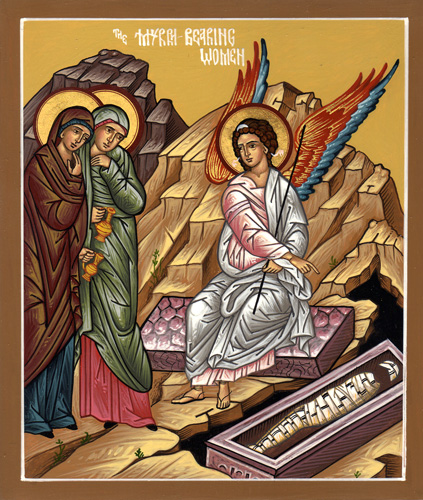 Sometimes the order in which we pray also teaches us important things. Our services and prayer books are comprehensive and teach us every way we should approach God in prayer. They are full of dogmatic truths and compunctionate sayings and prayers to the martyrs,  especially in the weekday Matins services.

I was struck about even the order in which our prayers are said in Matins when I was singing (I am using the term loosely) the praises for Monday of the week of the Myrhhbearers. The first sticheron was about the resurrection,  the next was a compunctionate one,  and the next was an ode to the martyrs.

I love how easily and naturally we mix thoughts and prayers of praise and dogmatic theology with compunction. We never get ahead of ourselves; we always remember what we are like even when we are not looking at a mirror[i].

Of course the ones who lived the resurrection to the fullest are those who died for it: the martyrs, and so we pray to the martyrs following the compunctionate sticheron.

If one prays the services of the church,  a rhythm is felt,  as natural and easy as breathing. In so doing,  our character is changed,  and we naturally think like God. Of course,  this is the process of salvation; we acquire the Mind of Christ[ii]. Every time I pray the services,  especially if I am alone in the quiet, I feel this mind and the excitement that in learning to pray,  I am acquiring it.

Save your pennies and buy the service books and pray with them. Our typicon and order of the services is complicated and daunting,  but so is sin. Praying them becomes second nature,  as they teach us to live in accordance with God's nature.

Of the resurrection: Every breath, all creation, glorifieth Thee, Lord, in that Thou didst  abolish death by Thy cross,  that Thou mightiest show the peoples  Thy resurrection from the dead, in that that Thou alone lovest mankind.

Of compunction:  Mindful of the unseemly sins I have committed, I flee to Thy compassions, imitating the publican, the harlot who wept, and the prodigal son; wherefore, I fall down before Thee O Merciful One, and say: before Thou condemnest me,  O God have pity and mercy upon me!

Martyricon: Ye suffered for Christ even unto death, O passion-bearers and martyrs. And though your souls are in the heavens, in the hand of God, your relics are venerated throughout the whole world. The priests and the people all bow down; and we cry out, be rejoicing: precious in the sight of the Lord is the death of His saints.

Praises,  Monday of the Myrhhbearers,  3rd Monday of Pascha,  Tone  2

PS. Did you notice the number of allusions to Scripture in these 3 hymns? I count at least 10. I would love to see them in the comments.

New Journal entries, homilies, etc. are on our BLOG: https://www.orthodox.net//redeemingthetime

[i] James 1:23-24  For if any be a hearer of the word, and not a doer, he is like unto a man beholding his natural face in a glass:  (24)  For he beholdeth himself, and goeth his way, and straightway forgetteth what manner of man he was.

[ii] Concerning the mind of Christ:

1Corithians 2:16  For who hath known the mind of the Lord, that he may instruct him? But we have the mind of Christ.

Ephesians 4:23-24  And be renewed in the spirit of your mind;  (24)  And that ye put on the new man, which after God is created in righteousness and true holiness.

Philippians 2:5-8  Let this mind be in you, which was also in Christ Jesus:  (6)  Who, being in the form of God, thought it not robbery to be equal with God:  (7)  But made himself of no reputation, and took upon him the form of a servant, and was made in the likeness of men:  (8)  And being found in fashion as a man, he humbled himself, and became obedient unto death, even the death of the cross.

Romans 8:26-29  Likewise the Spirit also helpeth our infirmities: for we know not what we should pray for as we ought: but the Spirit itself maketh intercession for us with groanings which cannot be uttered.  (27)  And he that searcheth the hearts knoweth what is the mind of the Spirit, because he maketh intercession for the saints according to the will of God.  (28)  And we know that all things work together for good to them that love God, to them who are the called according to his purpose.  (29)  For whom he did foreknow, he also did predestinate to be conformed to the image of his Son, that he might be the firstborn among many brethren.

Romans 8:6-7  For to be carnally minded is death; but to be spiritually minded is life and peace.  (7)  Because the carnal mind is enmity against God: for it is not subject to the law of God, neither indeed can be.

Romans 12:2  And be not conformed to this world: but be ye transformed by the renewing of your mind, that ye may prove what is that good, and acceptable, and perfect, will of God.

Romans 15:5-6  Now the God of patience and consolation grant you to be likeminded one toward another according to Christ Jesus:  (6)  That ye may with one mind and one mouth glorify God, even the Father of our Lord Jesus Christ.