Our building project began 12 years ago, when we established a building fund and started looking for a location. For a few years in the '90's, the parish income allowed us to grow the building fund rapidly, and donations to date total approximately $110,000. The total cost of our basic project will be approximately $270,000. We have secured a loan for $160,000 to cover the remaining costs. We will need to raise at least an additional $28,000 to pay for parking, landscaping, irrigation, and other requirements the city has told us must be fulfilled before we obtain an occupancy permit. In time, we plan to have an iconostasis built and icons painted, most likely from local Orthodox Christians.

A building committee, led by a licensed engineer and a registered professional land surveyor, laid out the criteria for a viable land purchase, and we spent many years looking for a good piece of real estate in the Dallas area. In the mid-1990's, we even looked at properties in Arlington and Fort Worth. After a long and difficult search, we decided in the fall of 2006 that the City of McKinney would provide us the best opportunity to find a suitable piece of land within our price range. In April of 2007, we purchased a plot of land in historic downtown McKinney, though we did not yet have the means to build and were undecided about whether this was the best location.

As time went on, it became clearer that building in McKinney is our best option. We will be the only Orthodox church within 15 miles, in a growing and vibrant community. When you look at a map of churches in the area (URL), there is a “hole” in McKinney. We feel that we are helping the DFW community best by locating there.

Once we made up our minds to build a temple on our land, we began to look for a lender, and we had a lot of trouble getting anyone to believe in us. The large national banks did not take us seriously, but we found a friend in a local bank whose vision is to build up the community in which they live and do business. Independent Bank (https://www.independent-bank.com/index.html) has believed in us, and we have a superb working relationship with them. When other banks said no, they found a way to say yes.

This has been a long and difficult journey, and the turning point for us was when we began to really apply ourselves to prayer. It is almost a cliché to say that we should pray about something, and we certainly did, but things really changed after we established a regular weekday liturgy in which we pray for all of our parishioners by name during in the Augmented Ectenia. We did not specifically pray for a new temple or land, but instead, have regularly, each Wednesday, served the liturgy and asked God’s mercy for everyone in our flock. This additional weekday liturgy is the most important turning point in our chronology. We have since added a weekly Molieben for the parish, served at the construction site.

Deacon Seraphim Holland becomes a resident of Texas, on the very day of the glorification of St John Maximovitch. Fr Seraphim had been asked by Bishop Hilarion (now our Metropolitan) to come to Texas to become the pastor of a small mission in Dallas that had been faithfully holding reader’s services. We immediately began holding reader’s vigils on Saturday night, with typica and a meal on Sunday.

Fr Seraphim ordained to the priesthood (March 6/19, the second Sunday of Great Lent).

Building Fund established. Search for a land or a suitable property begun.

Land purchased in McKinney. There is a long lapse in years between this and the previous entry, but there was really a lot going on. We looked at zillions of properties in zillions of places all over the Metroplex. Nothing was suitable. Finally, we found something, almost on a whim, in McKinney, and we were off and running (uphill).

The week after Nativity, we began our weekly weekday liturgies. This was made possible because Fr Seraphim no longer was working fulltime. The highlight of this liturgy is that we pray by name for everyone in the parish during the Augmented Ectenia. 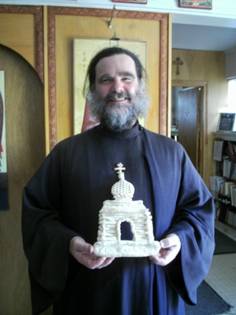 Dissatisfied with the original design, which had no provision for a church hall, we selected our Architect /Designer:

They are one of the first "LEED" (Leadership Energy Efficient Design) builders in the area. 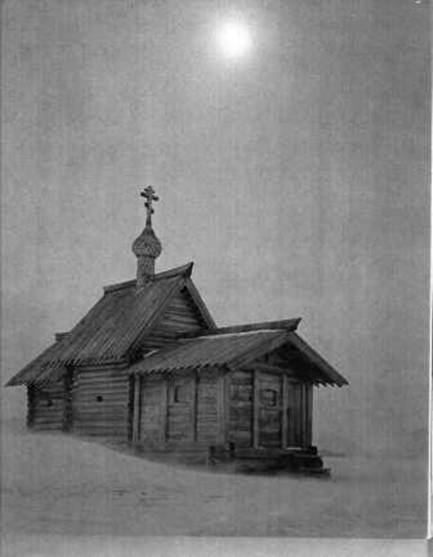 Design is based on the "Raising of St. Lazarus", the oldest wooden temple in Russia (above). It was originally at Muromansky Monastery and now resides in the Kizhi open air museum

Dr  McBride, retired professor of Architecture University of Texas at Arlington  helped us immensely during this design phase. He is Sub-Deacon at Holy Trinity Greek Orthodox Church. 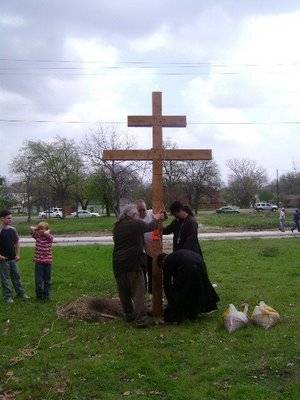 Cross erected on the Sunday of the Cross (3rd Sunday of Great Lent). 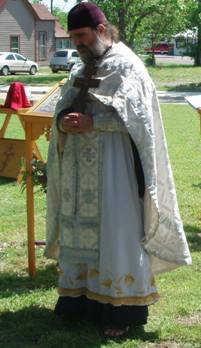 Outdoor Divine Liturgy on the land on St. Thomas Sunday (April 21/May 4), with a picnic afterwards.

Attempts to get a building loan begun. During discussion with Independent Bank, our eventual lender, it became apparent that we needed to account for a more substantial regular income. We instituted our first call for pledges, and the parish responded extremely well, increasing our income by fifty percent, which gave us enough income for the bank to consider us.

Loan approved.and building plans submitted to the city of McKinney for approval.

Letter sent appealing for benefactors: We wish to raise, if it be God’s will, $40,000 by asking 400 benefactors to give us alms of $100 or more each. We want to give our benefactors something back for their alms. Like the Apostle Peter, “Gold and silver have (we) none”, but we offer you our perpetual prayer. …..

Drilled holes for the piers and poured concrete. 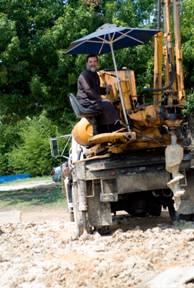 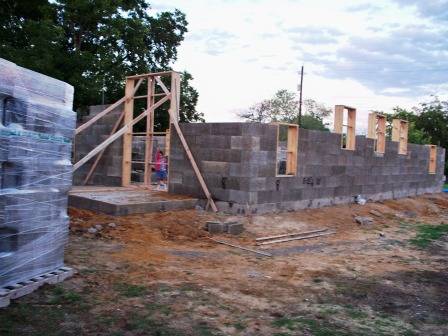 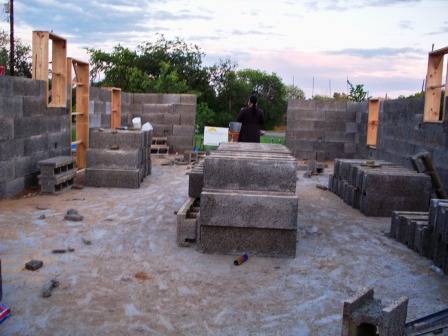 Lesser blessing of the waters 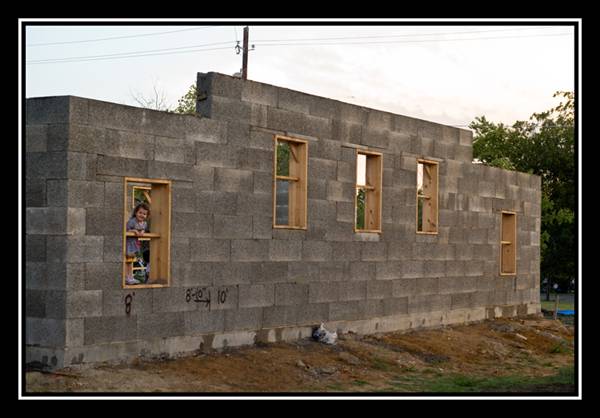 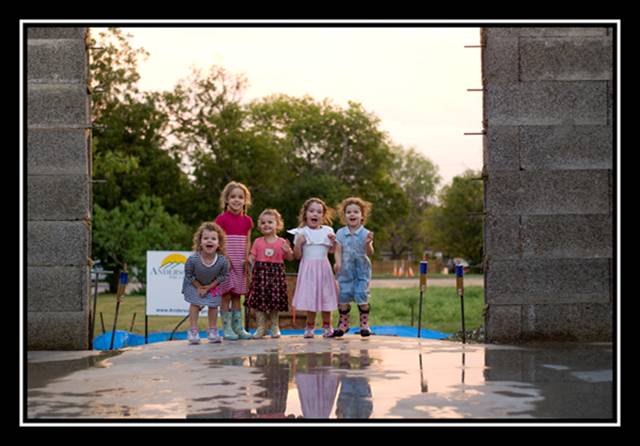 The Deaconesses after a Thursday evening moleben 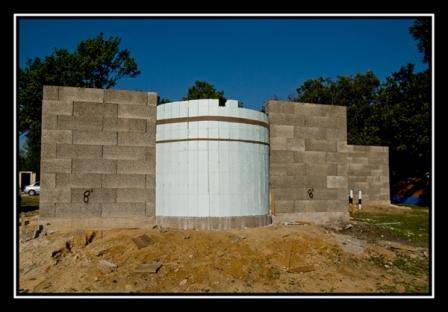 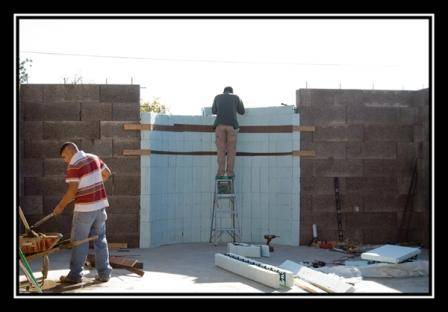 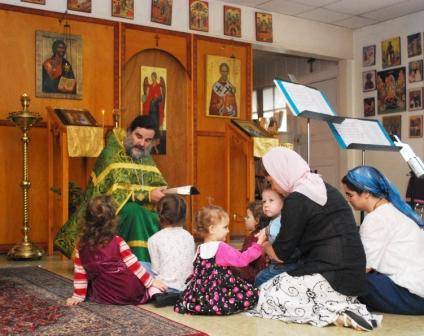 A homily at a children’s liturgy. 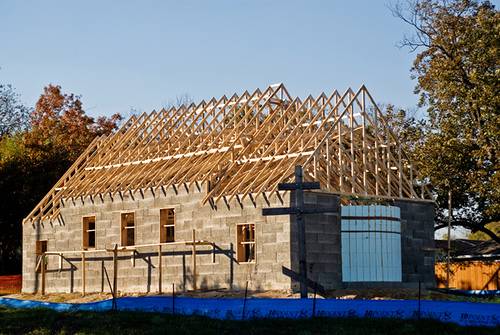 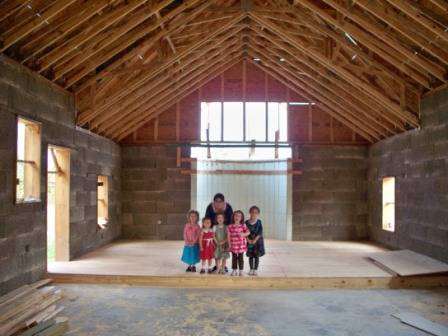 [photos to be added] 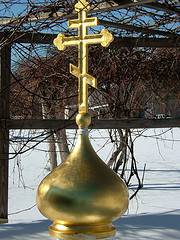 Anticipated date we will be able to use the temple.